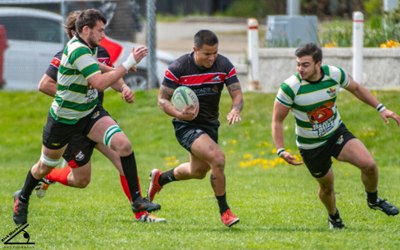 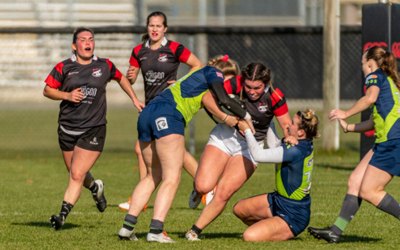 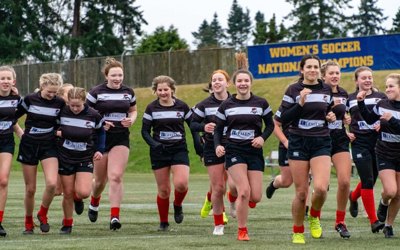 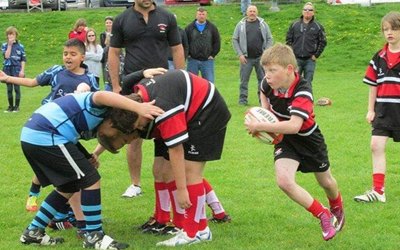 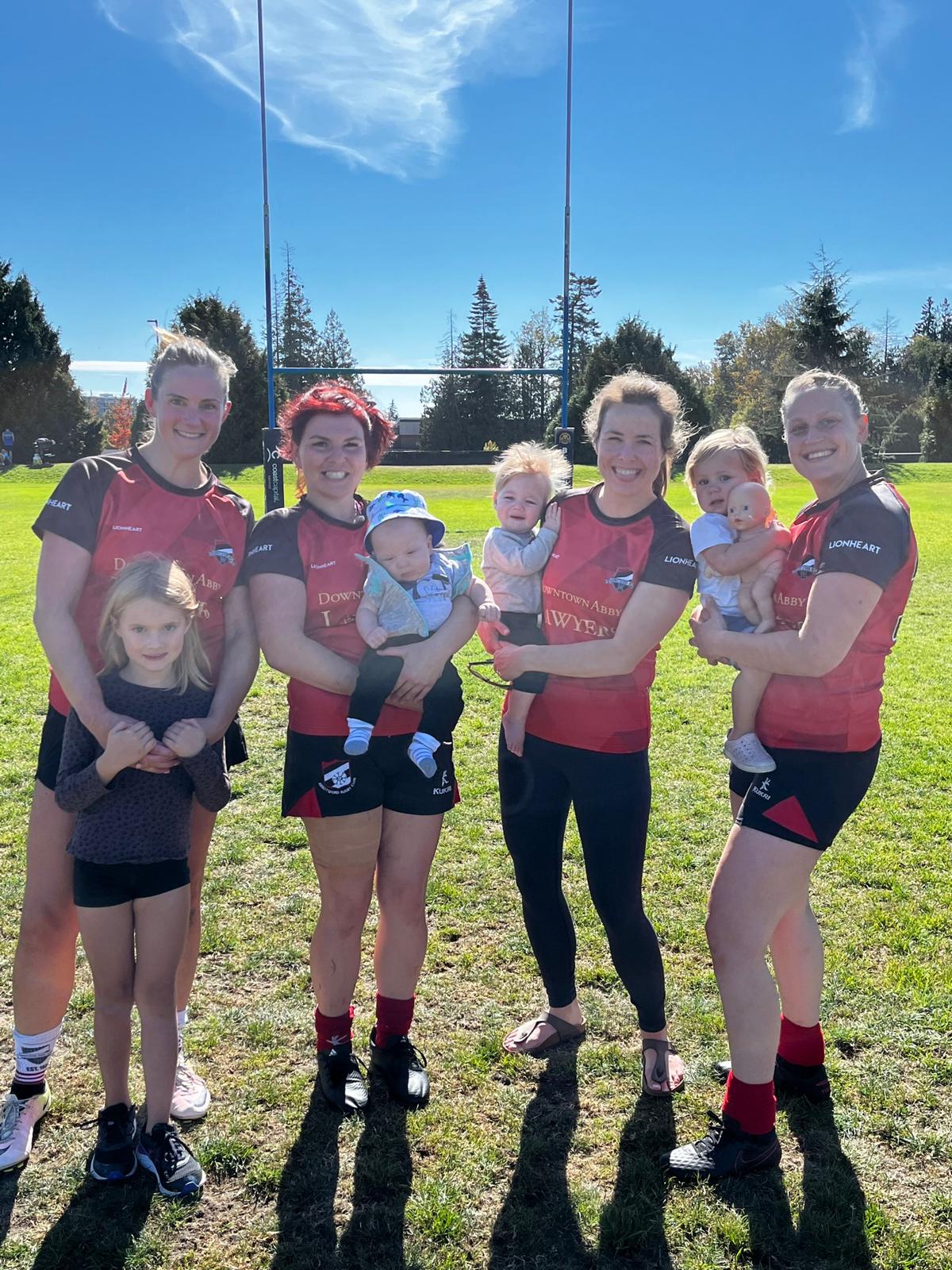 “I am the person I am because of Rugby. I hope my children can look up to me as an athlete and be inspired.”

Abbotsford RFC’s Senior Women’s Team has been hard at work this Fall, taking BC Rugby’s Mainland Division 2 League by storm. Among the roster of both rookie and seasoned athletes are five new moms, who have all welcomed additions to their families in the last two years.

During practice, they can be seen sweating on the pitch while running back and forth to the sidelines to check on their napping infants in carriers. Changerooms are a flutter of activity before matches, as feedings take place amongst the usual pre-game huddles. Babysitting is the norm in the stands as the athletes contest scrums and rush the try line.

Sonya, Jerusha, Kayt, Steph and Elyssa have taken on the difficult feat of multitasking motherhood and their passion for Rugby, but they have been instrumental on the team for their skills and experience, as well as their collective inspirations as mothers and upstanding members of our community.

For a team that is heavily comprised of young athletes fresh off the High School Rugby scene, the new moms exemplify how to push past boundaries and prove that anyone can continue to follow their passion for sport; no matter what stage of life you are in.

As Abbotsford RFC celebrates its 50th Anniversary season this Fall, it’s more apparent than ever that the Club is not just a family but harbors a family environment. Read below the stories of how Sonya, Jerusha, Kayt, Steph and Elyssa merge their passions for Rugby, family, and being part of the Club’s strong community.

If you are looking for a sport that allows you to get active, meet new people, and join a family-friendly environment, register for a Rugby Team now! 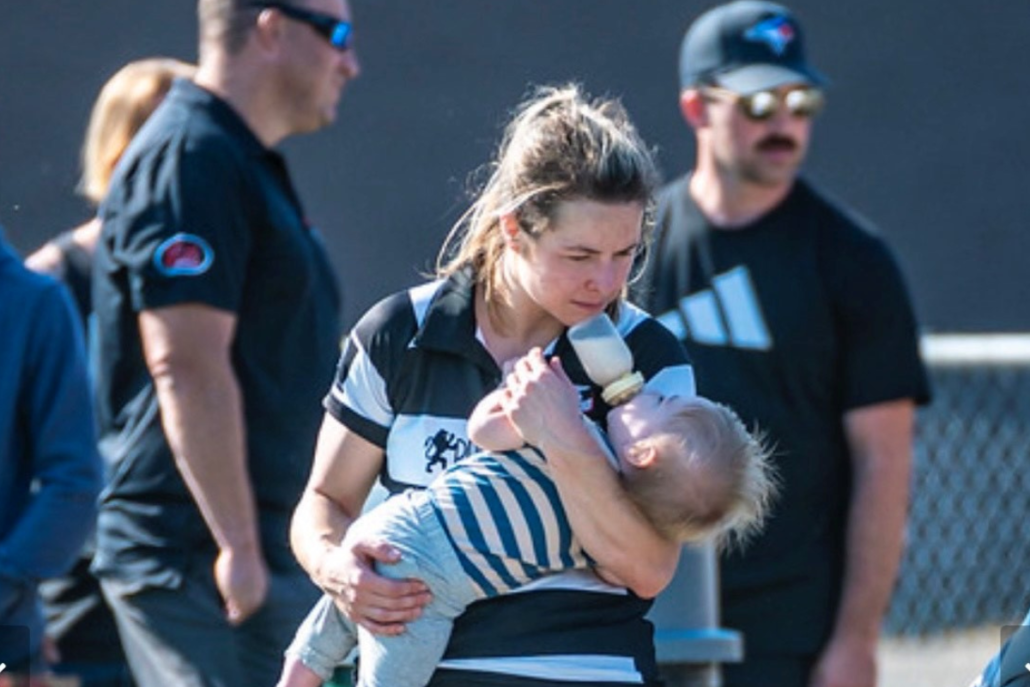 Sonya Foulds has been a life-long athlete and returned to the Rugby pitch this season after a hiatus to start her family. She is a dedicated mother of three children, now two after daughter Starr sadly passed.

Sonya describes being on the Rugby pitch as a euphoric feeling. Our sport has deeply impacted her life and she is grateful now to share her passion with her new family, who accompany her to practices and matches.

“Every day I wake up, I am the person I am because of Rugby. I hope my children can look up to me as an athlete and be inspired,” she reflects. “I feel my daughter Starr looking down on me from heaven and giving me so much power.”

Sonya uses Rugby as a motivating tool to push herself physically and mentally and hopes her children will one day feel the same way about the Sport she loves. 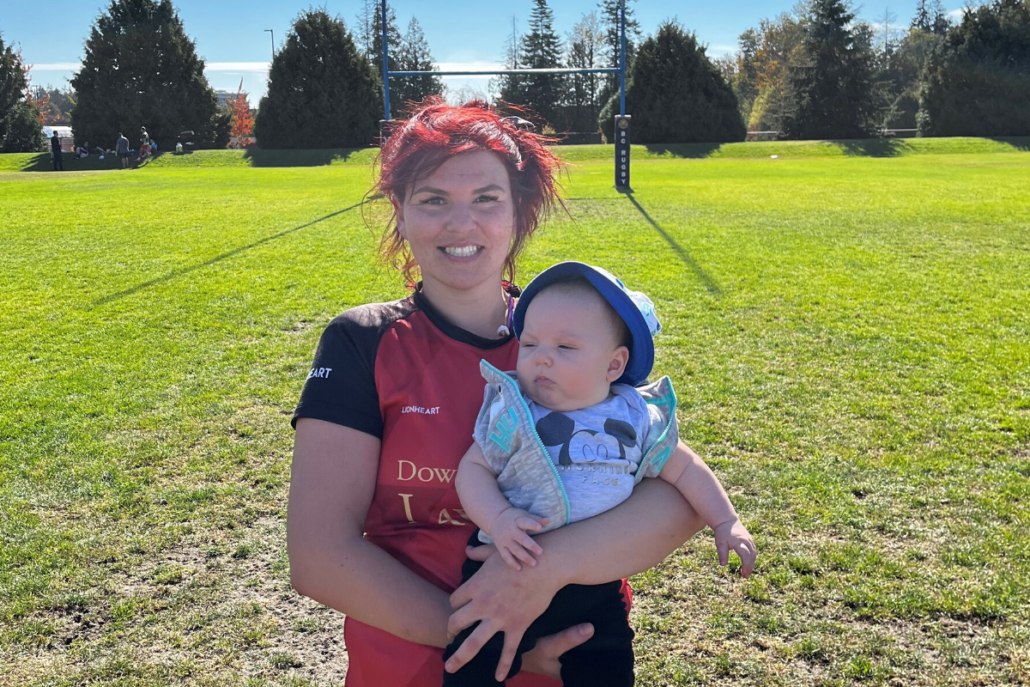 Jerusha Dunsmore has an impressive Rugby resume. In 2017, she was awarded the Abbotsford 300 Game Award after playing in 300 matches for the Club and has been a consistent presence on the pitch before, between and after having her two children.

Jerusha is dedicated and driven, often only requesting a few minutes of playing time and instead receiving ‘Player of the Match’ after finishing a full 80 minutes. Her love of the game and the community at Abbotsford brings her back season after season, remaining loyal to the Club despite moving to North Vancouver. 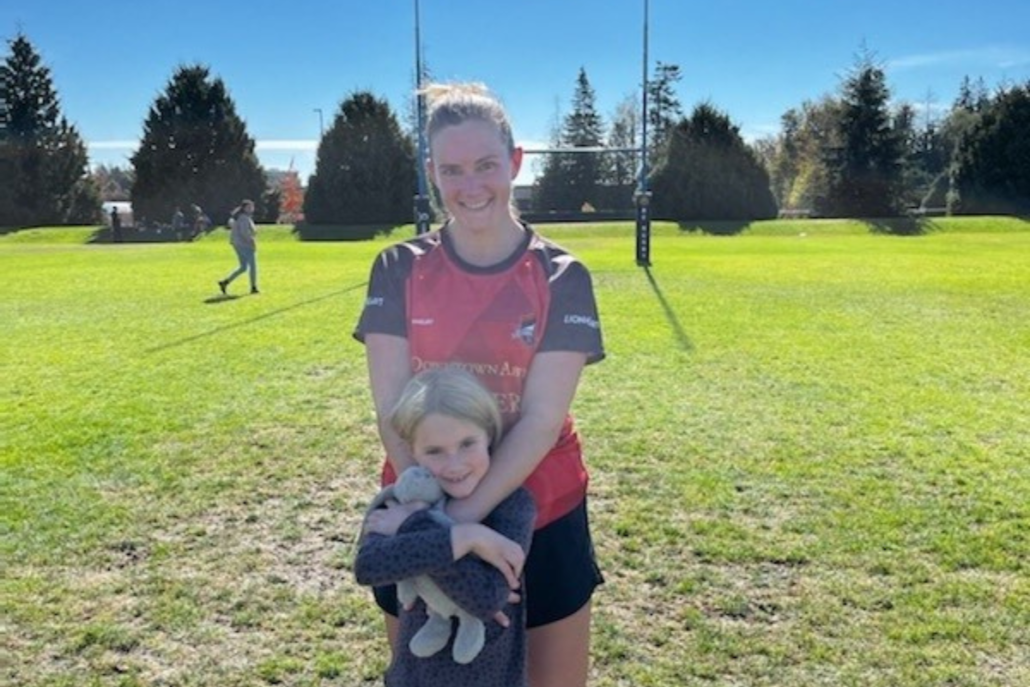 Kayt Etsell is both a Rugby player and Coach and returned to the pitch this season after having her newborn and healing from injury.

Despite taking a few years off, Kayt has loved being back to full contact and feels lucky to be able to take on the physical challenges of the game.

“We’ve had a few special women who have been big influencers in redefining what it means to be a mom while also pursuing items that are important as an individual,” she shared. “In this stage of life, pursuit while being a mom is directly linked with support and I really feel this from my family, teammates, and Club.” 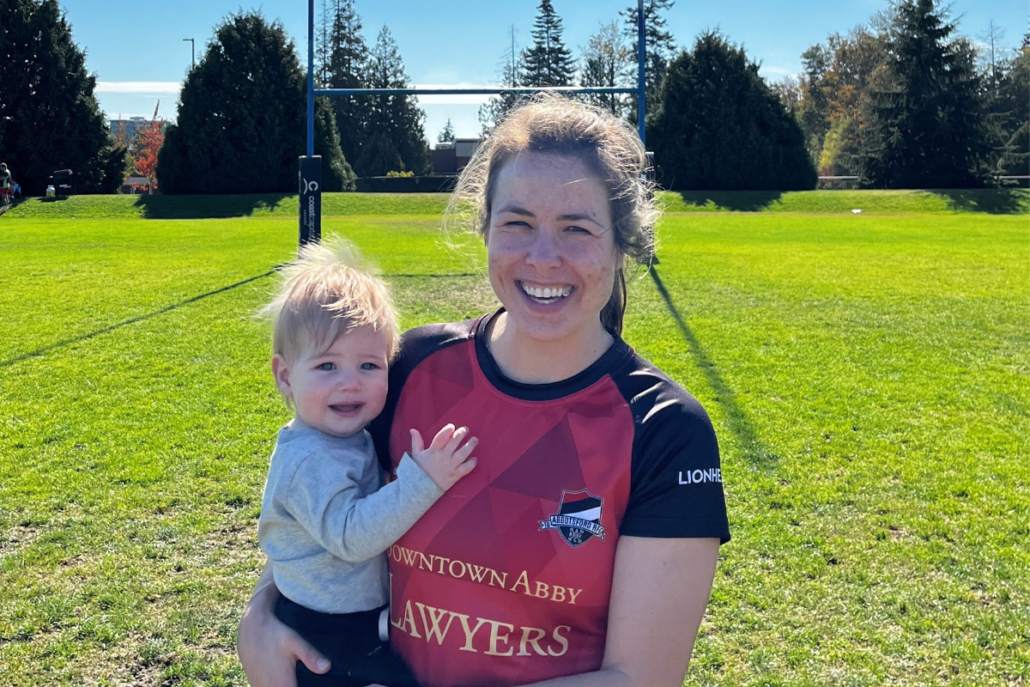 Steph Weibe believes strongly that Rugby shaped her life in a positive way. After having her 18-month-old, she hopes that she can be a role model for her child by showing her that you can always find opportunities to re-enter Sport regardless of physical or mental boundaries.

“Rugby is such a big piece of me, and nothing else quite compares to lacing up those cleats and throwing on that Abbotsford jersey. I hope to be able to show my daughter that you can continue to follow your passions into adulthood.” 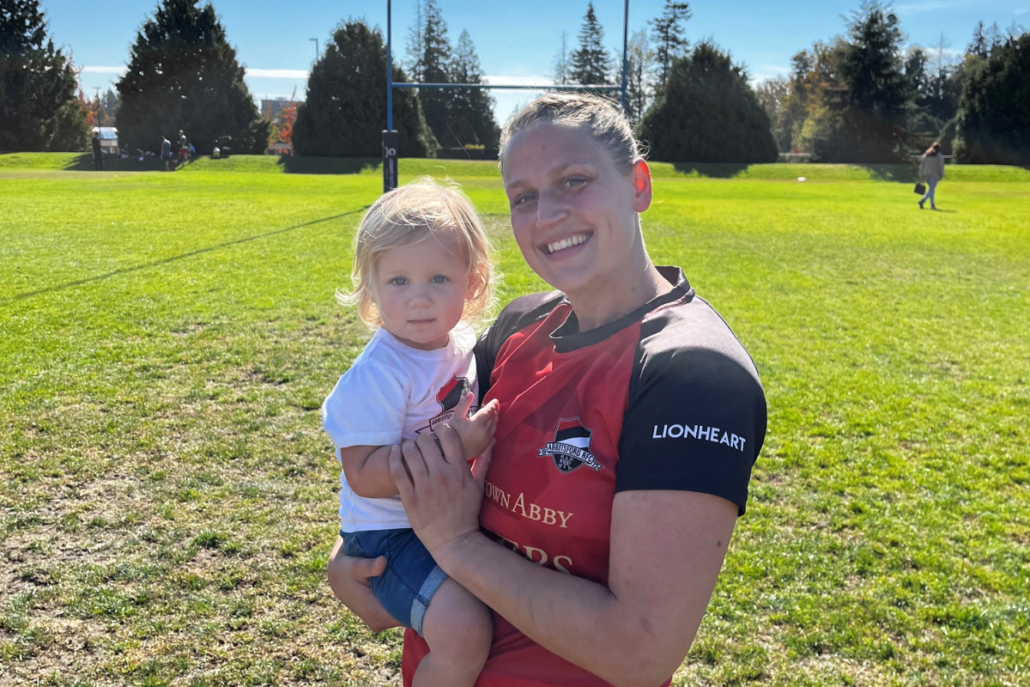 Elyssa Chalmers is a mother of two boys under the age of two. Rugby has been a big part of her life as an athlete, and as the place where she has met amazing people including her husband. After having kids and returning to training, Elyssa’s view on who and what an athlete is has shifted.

“Recovering post-partum, your body doesn’t feel like your own and it can be scary, but this game is a part of me. I want to show my kids who their mom is.”

Through the support she received from team-mates and the Club environment, Elyssa wants to continue to push herself and show her kids her resilience and love for Rugby.

“The boys keep me going and inspire me to keep being me because I want them to know the version of me that is fearless and just gets things done.”

Importantly to Elyssa, she hopes to inspire other players who have children to continue following their passions even if life changes and your family grows. 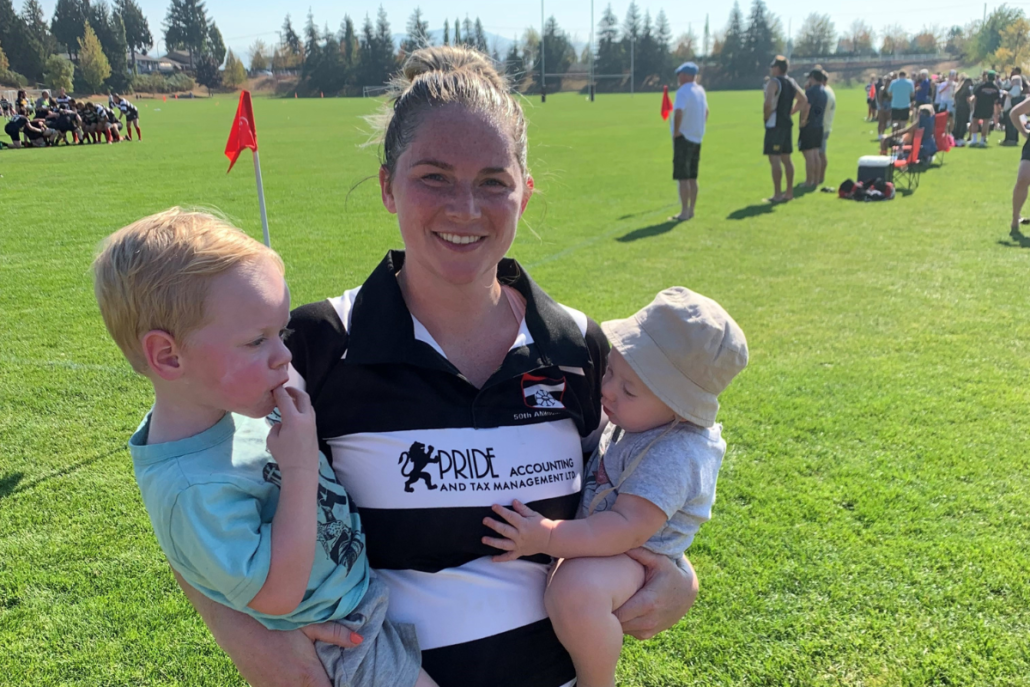 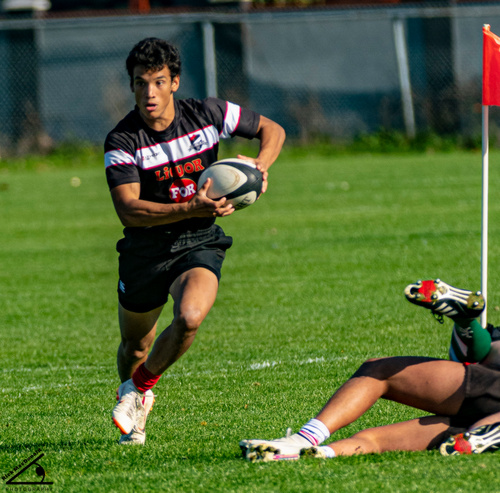 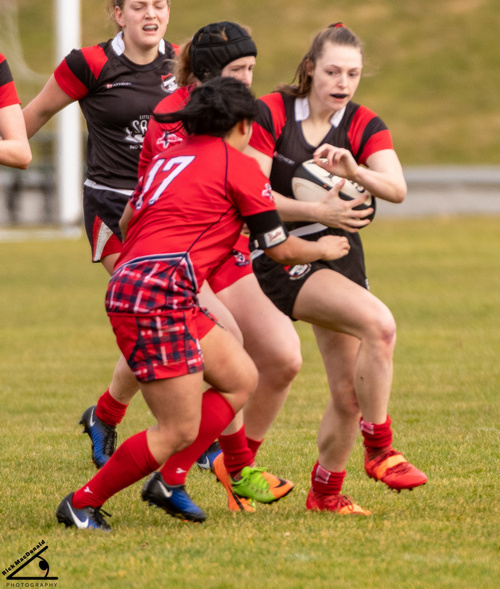